Welcome to Gil Boyne Online.
Gil Boyne made many original contributions to the practice of hypnotherapy in over 55 years of Hypnotherapy practice and teaching, and trained more than 12,000 hypnotherapists worldwide.

Gil Boyne Online was Gil’s last major project before he passed away, and he designed it to allow future generations of Hypnotherapists to benefit directly from his teachings. It is a fantastic resource for hypnotherapists of all levels, and especially for those who missed the opportunity to see Gil at work while he was alive.

Whether you are looking to be the best hypnotherapist you can be, or just someone with an interest in hypnotherapy, there is no better person to learn from than one of the pioneers of modern hypnotherapy.

Order Now or Find out more 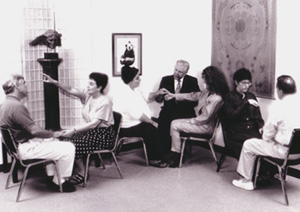 “Gil’s instruction and his advice on developing a practice and marketing my services helped me to become a highly effective practitioner. I feel that every serious student and practitioner of hypnotherapy should have the opportunity to study with Gil Boyne, the creator of modern Hypnotherapy.”
Tim Simmerman, Director, Hypnotherapy Academy of America, Sante Fe, New Mexico