This press article featured in the Glendale News Press on Monday, July 27, 1981. 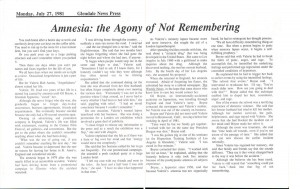 You rush home after a hectic day at work and carelessly drop your car keys on the coffee table. You need to run up to the store for a last minute item, but you can’t find your keys. Or you park your car in a large parking structure and can’t remember where you parked it.

Then there are days when you can’t put names and faces together for the life of you. We all have days when our minds are as tight as a sieve. Occasional forgetfulness is just a part of life. But for Valerie Hall Austin, “forgetfulness” almost ruined her life. Valerie, 30, lived two years of her life in a mental fog caused by amnesia until Gil Boyne, a Glendale hypnotist, “cured” her.

Although she never forgot who she was, she gradually began to forget day-to-day occurrences, business appointments, friends and acquaintances. She eventually became suicidal because she only had a 50-second retention span. Owning an advertising and promotion company in England, Valerie’s life was filled with excitement, running to the Cannes Film Festival, art galleries, and conventions. But she got to the point where she couldn’t remember anything about what she had been doing.

“What was the use of going out, if you couldn’t remember anything the next day,” she said. Valerie became so depressed that she saw no reason for leaving her home in St. Anne’s, England and considered suicide.

The amnesia began in 1979 after she was nearly killed in an automobile accident. Valerie had been driving home from a promotional campaign in Glouster when the accident occurred.

“I was driving home through the country. . . suddenly a man ran across the road. I swerved . . . and the car plunged into a ravine,” said the Englishwoman. She said that two months later she began forgetting where she had gone the night before and whom she had met, if anyone. “It began when people would stop me in the street and begin to chat,” Valerie said. “Sometimes I had to ask if I knew them, for I honestly couldn’t say who they were although they often turned out to be lifelong acquaintances. ”

She added that she continued dating (at the time she was divorced from her first husband) but often forgot completely about ever meeting the various men. “Fortunately I was not in the position where I slept around, so I never had to worry whether I had been to bed with him,” she said, giggling with relief. “I had no moral conscience because I couldn’t remember.” On one occasion, Valerie’s mental lapses interfered with her business. She was doing a promotion for a London art exhibition which involved a great deal of publicity. “I clean forgot to release any information to the press and as a result the exhibition was a flop,” she said with chagrin. Valerie explained that she felt as if there was a haze or fog over her mind and that “energy would leave me completely.” She said that her business called for her to go out frequently. For one promotional campaign, she attended a posh cocktail party at a large London hotel. “I left my coat with my friends and went to the toilet. An hour and a half later I was still there,” she said. “I have no idea what happened in that time.”

As Valerie’s memory lapses became more and more intrusive, she sought the aid of a London hypnotherapist. After spending fruitless months with him, she read about a “miracle drug” that was being developed in the United States. She came to Los Angeles in July 1980 with a girlfriend to make inquiries about the drug. Although she discovered nothing, she met her current husband, John. By the fourth day of her Los Angeles stay, she accepted his proposal.

When she returned to England, her amnesia worsened. Afraid of forgetting her fiance, she submitted her story to a tabloid newspaper, The Weekly News, in the hope that some doctor who knew how to cure her would contact her. Gil Boyne, an internationally-acclaimed authority on hypnotism, was traveling through England and read Valerie’s story. Boyne contacted the newspaper and Valerie’s mother, but Valerie was out of the country on business. Boyne and Valerie did not meet until Valerie moved to Brentwood, Calif., two days before her wedding in April of 1981. “Time went by but we finally got together. I worked with her on the same day President Reagan was shot”, Boyne said.

“I was his guinea pig at one of his seminars (at the Hypnotism Training Institute of Los Angeles in Glendale),” Valerie said. “I was cured in five minutes.” Boyne corrected her claim. “I worked with her for an hour,” he explained, adding that she honestly believes it only took five minutes because of the posthypnotic amnesia all subjects expenence. Boyne, a hypnotist since 1956, said that because Valerie’s amnesia was not organically based, he had to reintegrate her thought process. “We all have difficulty remembering things at one time. But when a person begins to panic when memory lapses occur, it begins a self-fulfilling prophecy.”

Boyne said that with Valerie he had to break the habit of panic, anger, and rage. To accomplish this, he intensified the underlying feelings and performed age regressions under the controlled conditions of hypnotism. He explained that he had to trigger her back to earlier events by using the intensified feelings. “She relived four events,” Boyne said. “I intervened to re-educate her. I’d say, ‘You’re much older now. How are you going to deal with this?'”

Boyne added that this technique enabled him to dispel her hurt, resentment, anger, and rage. One of the events she relived was a terrifying experience of domestic violence. She said that her former husband had tried to kill her mother. Although her mother survived, the guilt, helplessness, and rage stayed with Valerie. She swore that she had blocked the incident out of her mind until Boyne made her relive it. Although the event was traumatic, she said that “time heals all wounds, even if you’re not aware of the passage of time.”

She added that she can now discuss the earlier incident rationally. Since Valerie has regained her memory, she said that family and friends say that she sounds different. “They say it (her voice) changed back to the way it was before the accident. ” Although she believes she has been cured, Valerie is still scared that “something could put me back, “–back into that fog of not remembering.