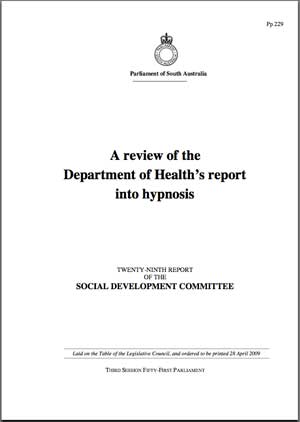 Eighteen years ago, I was in Sydney, Australia to teach a Hypnotherapy seminar. Hypnotherapists there were concerned because legislation which was soon to be passed in New South Wales was to include hypnotherapy under the Psychological Practises Act. There was a possibility that hypnotherapists would be included under a “grandfather clause”, but they would have to meet certain criteria as drawn up by the Psychologists.

No one had a copy of the bill or any knowledge of the exact wording of it. Someone vaguely remembered that the Sydney Morning Herald newspaper had printed the details of the bill about two years earlier when it was first introduced.

I found the newspaper printing of the bill in a scrapbook of a colleague, and discovered it was a bill to register psychologists. Hypnotherapists could be registered provided they met the criteria nominated by members of the psychology board.

I learned that the bill was under the control of the N.S.W. Minister for Health but my friends told me that he was not hearing any further discussion on the bill. A friend knew of a powerful lobbyist and arranged a meeting. We created a press release for the media that I had come to Sydney to teach pain control to nurses in order to reduce the need for drugs and to control other symptoms. As a result, I appeared on two major TV shows and on the six o’clock evening news plus a feature story in the newspaper.

The real bonus was that the lobbyist was able to arrange a twenty minute meeting with the N.S.W. Minister for Health.

When I arrived at the Minister’s office, there were two physicians, a solicitor and a psychiatrist. My twenty minutes kept stretching out until two hours and ten minutes later, the Minister thanked me for my input and bid me “Good Day” (the others had stormed out earlier with ruffled feathers).

In summary, I convinced the Minister that it would be mistake to pass the bill in its present form, specifically in relation to the practise of hypnotherapy. As a result, the bill was killed!

It took another ten years for the Psychological Practises Act to be heard again and once again they tried to control the hypnotherapy profession. My colleagues used the same arguments I had used and the wording that dealt with hypnotherapists was deleted and their bill was passed.

The fight went on in the other states to revoke the restrictive bills forbidding hypnotherapists to practice. State by State, the bills were revoked and now, after almost twenty years from my meeting with the NSW Minister, the last holdout, South Australia, is going to revoke their restrictive law against (lay) hypnotists.

The committee’s report can be viewed in full here, and I have pulled out extracts below, as there is much to learn from it.

With Respect All,
Gil Boyne

Extracts from the Twenty-ninth report of the Social Development Committee of South Australia: ‘A review of the Department of Health’s report into hypnosis’

In examining the subject of hypnosis, the Department of Health considered scientific literature on the harms and safety associated with hypnosis. It also examined professional and consumer protection issues related to hypnotherapy and international and Australian regulatory approaches. The report concluded that the practice of hypnosis should be deregulated in South Australia.

the Department of Health report states that ‘there is currently no universally accepted definition of hypnosis.’

Having reviewed the relevant scientific literature, the report concludes that while there are known harms associated with hypnosis, these ‘are not common’ and can be minimised or even prevented if:

The report observes that while there is a paucity of scientific evidence of the safety and efficacy of hypnosis as practised by lay hypnotherapists, ‘the evidence of a high risk of harm to the public does not appear sufficient to warrant a prohibition on practise.’

The Psychological Practice Bill 2006, introduced into Parliament on 27 September 2006, aims to remove the current restrictions placed on the practice of hypnosis. The grounds for removing the restriction include:

The Bill has not yet passed. If passed, the Bill would repeal the Psychological Practices Act 1973.

In 1995, the Commonwealth and all state and territory governments signed the Competition Principles Agreement. The Agreement stated that legislation should not restrict competition unless it can be demonstrated that the benefits of restriction to the community as a whole outweigh the costs; and the objectives of the legislation can only be achieved by restricting competition.

In the late 1990s, as part of the review of all health practitioner legislation, the National Competition Review Panel examined the South Australian Psychological Practices Act 1973. In doing so, the Review Panel recommended that all references to hypnosis be deleted, noting that people working in a number of professions and disciplines may want to use hypnosis in a professional context but are restricted from doing so because of the provision contained in Part 4, Section 39 of the Act.

Moreover, the Review Panel found that the definition of ‘hypnosis’ in Part 4 of the Psychological Practices Act 1973 had limited effect because it allows other providers to offer a related or identical service as long as the term ‘hypnosis’ is not used. The effectiveness of Section 39 of the Act was also questioned because it allows any psychologist or medical practitioner to use hypnosis regardless of whether they have any specific training in that field.
The National Competition Review Panel also noted that there was little evidence of harm resulting from the practice of hypnosis or similar practices and, in addition, there is a continuing difficulty in defining ‘hypnosis’ and related terms such as ‘hypnotherapy’.

As a result of the findings of the review, the State Government developed the Psychological Practice Bill 2006 and removed the reference to hypnosis in this Bill— in line with similar legislation across Australia.