The following article by Rupert Morris appeared in Woman Magazine. 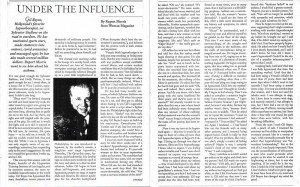 Gil Boyne, Hollywood’s favorite hypnotherapist, set Sylvester Stallone on the road to stardom. He has motivated sports stars, made stutterers into orators, cured amnesiacs and massaged egos; he has also made several million dollars. Rupert Morris went to see him about his asthma.

“Sleep now!” he barked, clasping me with one hand round my neck, the other round my upper arm, giving me a quick shake. I let out a startled moan and went limp, allowing him to guide me on to the bed. As I lay there, my right arm still tingled with the pressure of his grip. He told me it would feel light, and so it did. It seemed to lift of its own accord towards my chest. My left arm, by contrast, felt quite heavy – as he told me it would. He said my eyelids would lock shut and they did. While I was in hypnosis, I was only vaguely aware of my surroundings, conscious, but responding only to this man’s suggestions. He told me I would feel great when I woke up, and so I did.

This was my first session with Gil Boyne, founder of the Hypnotism Training Institute of Los Angeles, and by common consent, the most remarkable hypnotherapist in the world today. Gil Boyne has hypnotised film stars, footballers, tennis players and thousands of ordinary people. His specialty is inducing trance in seconds – or, as he terms it, rapid induction! Before he practiced it on me, he had told me something about himself, and his art.

We chatted over morning coffee in the lounge of a nearby hotel, while Gil showed me lots of American newspaper cuttings, and handouts, to which he frequently referred. Brought up in a poor Irish neighborhood in Philadelphia, he was introduced to hypnosis by his mother’s cousin, a magician and stage hypnotist, Nosredna, The Great (his name, Anderson, spelt backwards).

His familiar rags-to-riches story involved a spell in the navy and stints as a door-to-door salesman, before Gil began to learn about self-hypnosis, and practice hypnotising people on stage in supper clubs and theatres. He doesn’t apologize for his showbiz background (“Most therapists don’t have the entertainer’s personality,”), and believes that his present work is both serious and important.

“People think hypnotherapy is to help you stop smoking, or biting your nails. But the way I teach it, it can deal with any problem except certifiable mental illness, and certain medical conditions that we’re forbidden by law to claim we can cure.” But Gil told me that he had, in fuct, cured ulcers – which, like so many things are often psychosomatically induced. When I told him I had suffered with asthma for 36 years he promised to cure me.

He has had many notable successes, of which Sylvester Stallone was one. He came to Gil when his career was in a rut, and they got to talking about boxing; it was Gil’s suggestion that he write a script about a fighter from the Philadelphia fight clubs they both knew. “Rocky” was the result, and every day on the set Stallone used to play Gil Boyne’s tapes to build up his motivation. Comedienne Lily Tomlin said if she had her own production company, she would have a room with couches and headsets and Gil Boyne tapes for all her employees.

I was even more impressed with a story he told three weeks later at a weekend hypnotherapy seminar. A doctor had referred a 53-year-old woman to him to treat mysterious rashes on her arms. The condition had persisted for two years, with no cream or medication having any effect. When Gil saw her she had scratched her arms until they bled. She has neuro-dermatitis, she told him. “You mean a nervous irritation of the skin?” he asked. “Oh no,” she insisted. “It’s neuro-dermatitis.” He soon established that she had never married, and had lived with her mother until her death two years earlier – circumstances which made her particularly vulnerable. Further sympathetic questioning, under hypnosis, revealed that she had a fantasy love affair with her boss, and that a new woman at work had emerged as a rival, either real or imaginary. She said “she’s such an “Eager Beaver” – she really gets under my skin.”

Gil rubbed an area near her elbow and told her that her rashes would begin clearing at that point. He also insisted, despite her protests, that she take her “rival” out to lunch to become better acquainted with her. When she returned four days later, she was in a sleeveless shirt, her arms smooth and spotless. She thanked Gil for his treatment, the rubbing of the elbow in particular. He asked her how her lunch had gone and she said: “Oh, very well indeed. She’s really a nice person. And do you know, she’s been going with the same boyfriend for three years, and they’re soon to be married!” Gil scarcely needed to explain that this was a case where lunch had been infinitely more therapeutic than any amount of elbow-rubbing: all that mattered was that the woman’s “rival” was no longer a threat, and that the cause of her anxiety had been removed.

Now it was my turn to be hypnotised again – this time it would be on stage in front of a class of more than 165 hypnotherapists at Regent’s College. Having sat through two days of lectures, films and live hypnotherapy, I knew what to expect. I was feeling rather irritable and I wasn’t sure that I wanted to expose my innermost neuroses to a crowd of strange faces.

First we talked about my asthma – how it had developed in my childhood, how I had been told about my grandfather’s asthma, how I had visited specialists, and how I had come to accept that I was asthmatic. Gil suggested that the idea had been reinforced so many times, over so many years, that it had become a self-fulfilling prophecy. Asthma, was a convenient label, like the woman’s “neurodermatitis”. I could see the force of this. After a little more discussion of my history and symptoms, he asked me to stand up.

“Sleep!” he commanded, and I closed my eyes and allowed myself to be guided to the floor of the stage. This time I was more aware of my surroundings, of the coughs and scraping chairs in the audience, and the rattle of microphones being arranged around me. He began counting from one to 10, urging me to become aware of a shortness of breath; nothing happened. He began counting again, this time asking me to go back to my childhood: where was I? How old was I? I hesitated before each answer, finding it difficult to visualize myself as anything other than a 37 year-old man lying on a stage trying to be hypnotised. Did I love my mother? Did she love me? I thought so. Gradually I began to feel wheezy. Now I was asked to complete a sentence beginning “I get wheezy because…” I gave various reasons: because I got frightened, because I was alone, because my mother wasn’t there, because there was no one to cuddle. Then he asked me to repeat the sentence: “I start to get wheezy whenever I feel unloved.” I repeated it. “True or false?” he asked me. Again I hesitated – I had heard him use this formula with so many other patients, and I resented being pigeon-holed. Could it really be that simple? Was my problem, like everyone else’s, simply a matter of feeling unloved? Maybe it was; I certainly couldn’t think of any other reason. “True,” I said, resignedly.

Then, I told how as a child I would get asthma in the night, and climb into my parents’ bed. Gil made me repeat the phrase: “I felt safe, and I got sympathy and attention.” I described how my asthma had improved as I had got older, so that I felt I had some control over it. Gil told me that now I was aware of the ways in which I had reinforced this “fictitious belief” in my asthma, I would feel a greater control. “Rupert, you are a lovable person,” he said. “You will no longer be satisfied with sympathy and attention, which are just a pale substitute for love.”

Now he began to wind up the session, suggesting that I might continue working with another hypnotherapist later. Was there anything I wanted to say before he brought me up? I said that, if he didn’t mind my saying so, I didn’t feel I had been properly hypnotised. He asked me how I would feel if I were deeply hypnotised, and I said I didn’t know. So how did I know I wasn’t hypnotised? Could I be the victim of a popular misconception? I agreed that I could.

Looking back, I still don’t feel that I was fully hypnotised that time. But something worked. Until that day I had been using a Ventolin inhaler for more than 25 years; there had been some days when I didn’t need it, but recently I had been using it several times a day. It is now six months since that session, and I have not used the inhaler once. I was allergic to dogs, but I have been in rooms with dogs, and scarcely noticed; I was allergic to cats, but I have had a cat on my lap without any ill effects; running would often exacerbate my asthma, but I have done a four-mile run round the park faster than ever before, with few breathing difficulties.

From the start I took Gil Boyne with a pinch of salt. I resented his certainty and his ability to manipulate everyone around him in a variety of ways. I did eventually persuade him to admit that hypnotherapy was “benevolent brainwashing”. But at the end of it, I was deeply impressed. Here was the personification of will-power: a man who could persuade other people to do what he wanted. It was frightening at times, but it was also inspiring. If he could do it for me, then I could do it for myself. Asthma? I don’t believe I shall ever get it again. It must have been all in my mind and Gil Boyne has changed my mind for good.