This article first appeared in the GLOBE on October 6th, 1981. 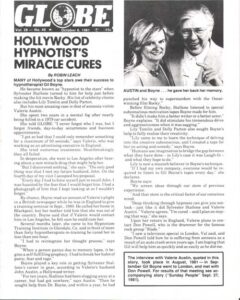 MANY of Hollywood’s top stars owe their success to hypnotherapist Gil Boyne.

He became known as “hypnotist to the stars” when Sylvester Stallone turned to him for help just before making the hit movie Rocky. His list of celebrity clients also includes Lily Tomlin and Dolly Parton.

But his most amazing case is that of amnesia victim Valerie Austin. She spent two years in a mental fog after nearly being killed in a 1979 car accident.

She told GLOBE: “I never forgot who I was, but I forgot friends, day-to-day occurrences and business appointments. I got so bad that I could only remember something for a maximum of 50 seconds,” says Valerie, who was working as an advertising executive in England. She tried numerous treatments. Heartbreakingly they all failed.

In desperation, she went to Los Angeles after hearing about a new miracle drug that might help her. “But I discovered nothing,” she says. “The only good thing was that I met my future husband, John. On the fourth day of my visit I accepted his proposal. “Every day I had to force myself just to recall John. I was haunted by the fear that I would forget him. I had a photograph of him that I kept looking at so I wouldn’t forget.”

By chance, Boyne read an account of Valerie’s plight in a British newspaper while he was in England to give a training seminar in Sept., 1980. He called her home in Blackpool, but her mother told him that she was out of the country. Boyne said that if Valerie would contact him in Los Angeles, he felt sure he could cure her. Several months later, she came to his Hypnotism Training Institute in Glendale, Ca. and in front of more than forty hypnotherapists-in-training he cured her in less than one hour.

“I had to reintegrate her thought process,” says Boyne. “When a person panics due to memory lapse, it begins a self-fulfilling prophecy. I had to break her habit of panic, fear and rage.”

Boyne played a key role in getting Sylvester Stallone’s career in gear, according to Valerie’s husband John Austin, a Hollywood writer. “For ten years, Stallone had been slugging away at a career, but had got nowhere,” says Austin. “Then he sought help from Dr. Boyne, and within a year, he had punched his way to superstardom with the Oscar winning film Rocky.” Before filming Rocky, Stallone listened to special subconscious motivation tapes Boyne made for him. “It didn’t make him a better writer or a better actor,” Boyne explains. “It did stimulate his tremendous drive and aggressiveness when it was sagging.”

Lily Tomlin and Dolly Parton also sought Boyne’s help to fully realize their creativity. “Lily came to me to learn the technique of delving into the creative subconscious, and I created a tape for her on acting and comedy,” says Boyne. “Humans use imagination to bridge the gap between what they have done – in Lily’s case it was Laugh-In and what they hope to do.” Lily is now a staunch believer in Boyne’s technique. “If I had my own company, everyone would be required to listen to Gil Boyne’s tapes every day,” she declares.

Boyne says: “We screen ideas through our store of previous experience. And that store is the critical factor of our conscious mind. Deep thinking through hypnosis can give you outlook – just like it did Sylvester Stallone and Valerie Austin.”

Valerie agrees, “I’m cured – and I plan on staying that way,” she says. Upon her return to England, Valerie plans to contact Don Powell, who is the drummer for the famous rock group “Slade.” “I saw a television special in London, Val said, and Don Powell told how he is suffering from amnesia as a result of an auto crash seven years ago. I am hoping that Gil will help him as quickly and as easily as he did me.

The interview with Valerie Austin, quoted in this story, took place in August, 1981 – in September Gil Boyne went to London, and met with Don Powell. For results of that meeting see accompanying story (“Sunday People” Sept. 27, 1981).